Year Of The Cat 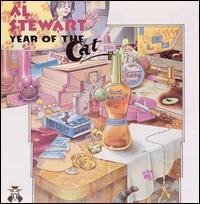 
Go and tell Lord Grenville that the tide is on the turn
It's time to haul the anchor up and leave the land astern
We'll be gone before the dawn returns
Like voices onthe wind.

Go and fetch the captain's log and tear the pages out
We're on our way to nowhere now, can't bring the helm about
None of us are left in any doubt
We won't be back again

Our time is just a point along a line
That runs forever with no end
I never thought that we would come to find
Ourselves upon these rocks again
Oh no...

Nothing ventured, nothing gained they said
So you played for the winner takes all
And tossed the dice high up and craned your head
To see how the numbers would fall
You stole the game so easily
Your luck ran with the seasons
But still the shadow that the night won't free
Just follows wherever you go

Another day, another boarding card
As you wait for your seat on the 'plane
The movie runs but you're still working hard
And you don't touch your food or champagne
I know that when your well runs dry
You'll want to know the reason
The empty night will bring you no reply
As it follows wherever you go

Sand In Your Shoes

You always were a city kid
T hough you were country raised
And back in some forgotten time
W e shared the cold north days
But the simple life was not your style,
And you just had to escape
So it's goodbye to my lady of the islands

On Remembrance Day the bands all played,
The bells pealed through the park
And you lay there by the "Do Not" signs,
And shamed them with your spark
Now winter moans in old men's bones
A s the day falls into dark
And it's goodbye to my lady of the islands

The summer sun beats on and on,
The shops swim in the heat
And you're standing by the traffic signs
W ith taxis at your feet
Oh I know that in your city skin
You're feeling more complete
So it's goodbye to my lady of the islands

If It Doesn`t Come Naturally, Leave It

Nothing that's forced can ever be right
If it doesn't come naturally, leave it
That's what she said as she turned out the light
And we bent our backs as slaves of the night
She lowered her guard and showed me the scars
She got from trying to fight
Saying "oh, you'd better believe it"

Well I'm up to my neck in the crumbling wreckage
Of all that I wanted from life
When I looked for respect all I got was neglect
Though I swallowed the line as a sign of the times
But dealing a jack from the back of the pack
They said-"You lose again"
"Oh", I said, "who needs it?"

Well don't get me wrong now I tried to get on
With the jokers that got in my way
And I put on a smile and I tried all the while to be straight
But they just wanted more all the time and I'm sure
That you know what I mean when I say
That I'm sick of the touch and there's only so much you can take.

Well nothing that's real is ever for free
And you just have to pay for it sometime
She said it before, she said it to me
I suppose she believed there was nothing to see
But the same old four imaginary walls
She built for living inside
I said "oh, you just can't mean it"

Well there was never a doubt that she had to get out
She was just looking around for a way
In the pit of the night there was nowhere to hide any more
She was out on a limb, she was reaching for things
That she wanted, but just couldn't say
And she had to be sure that she wouldn't get caught like before.

Well nothing that's forced can ever be right
If it doesn't come naturally, leave it
That's what she said as she turned out the light
And she may have been wrong, and she may have been right
But I woke with the frost, and noticed she'd lost
The veil that covered her eyes
I said "oh, you can leave it"

With your photographs of Kitty Hawk
And the biplanes on your wall
You were always Amy Johnson
From the time that you were small.
No schoolroom kept you grounded
While your thoughts could get away
You were taking off in Tiger Moths
Your wings against the brush-strokes of the day
Are you there?

On the tarmac with the winter in your hair
By the empty hangar doors you stop and stare
Leave the oil-drums behind you, they won't care
Oh, are you there?
Oh, you wrapped me up in a leather coat
And you took me for a ride
We were drifting with the tail-wind
When the runway came in sight
The clouds came up to gather us
And the cockpit turned to white
When I looked the sky was empty
I suppose you never saw the landing-lights
Are you there?

In your jacket with the grease-stain and the tear
Caught up in the slipstream of dare
The compass roads will guide you anywhere,
Oh, are you there?
The sun comes up on Icarus as the night-birds sail away
And lights the maps and diagrams
That Leonardo makes
You can see Faith, Hope and Charity
As they bank above the fields
You can join the flying circus
You can touch the morning air against your wheels
Are you there?
Do you have a thought for me that you can share?
Oh I never thought you'd take me unawares
Just call me if you ever need repairs
Oh, are you there?

You told the man in the Broadway Hotel
Nothing was stranger than being yourself
And he replied, with a tear in his eye
Love was a rollaway
Just a cajole away
Mist on a summer's day
Nothing was clear
Love was a smile away
Just a defile away
I sought it every way
No-one came near

You're seeking a hideaway
Where the light of day
Doesn't touch your face
And a door-sign keeps the world away
Behind the shades
Of your silent day.

It seems to me as though I've been upon this stage before
And juggled away the night for the same old crowd
These harlequins you see with me, they too have held the floor
As here once again they strut and they fret their hour
I see those half-familiar faces in the second row
Ghost-like with the footlights in their eyes
But where or when we met like this last time I just don't know
It's like a chord that rings and never dies
For infinity

And now these figures in the wings with all their restless tunes
Are waiting around for someone to call their names
They walk the backstage corridors and prowl the dressing-rooms
And vanish to specks of light in the picture-frames
But did they move upon the stage a thousand years ago
In some play in Paris or Madrid?
And was I there among them then, in some travelling show
And is it all still locked inside my head
For infinity

Year Of The Cat

By the blue tiled walls near the market stalls
There's a hidden door she leads you to
These days, she says, I feel my life
Just like a river running through
The year of the cat

Well, she looks at you so cooly
And her eyes shine like the moon in the sea
She comes in incense and patchouli
So you take her, to find what's waiting inside
The year of the cat

Well, morning comes and you're still with her
And the bus and the tourists are gone
And you've thrown away the choice and lost your ticket
So you have to stay on