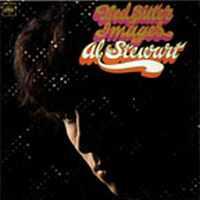 The friends I've left back home all write
With laughing words that warm my sight
Saying "Tell us, how's the city life?"
and I reply and say just fine

"Oh well, then perhaps I could help you
You know that St. Albans is miles away
And I've got a room in Swiss Cottage in which you could stay"

She laughed "Oh I couldn't do that,
For I've got to be up in the morning you see"
So I rang up to find out the first morning train she could take
And so in the gloom of a candlelit room
With spaghetti, two forks and a plate
She said "Oh I really would like to be free and escape"

Mr Carmichael says that he loves his wife, I believe he does
Gives her everything that a man can give
But Mr Carmichael beggars himself on the altar of his love
And you can tell him that that's not the way to live

And oh how the wind has blown
The leaves from the linden tree
And oh when the night grows free
Why does Mrs Carmichael come to me?

Mrs Carmichael rises at ten, takes her timeIs at her ease
Drinking coffee in slippers and negligee
Opens the door and the milkman brings her dreams, there's no-one sees
Except the statue of Venus and she won't say

And oh how the wind has blown
The leaves from the linden tree
And oh when the night grows free
Why does Mrs Carmichael come to me?

Oh Mr Carmichael, captain and star of his office billiards team
Smiles to greet the applause as his ball goes in
Hurrying back, bringing his victory home but there's no-one here
And supper waits on the table inside a tin

And I stood there quite surprised
To see reflected in her eyes
The very thought I left unsaid as too unwise.
And so we passed through a world of glass
And the moment passed and was lost to time
Time too soon with his broken moon took my Scandinavian Girl

Oh his life was only used
And his body just abused
By those who never think and never care
But though his file said suicide
No, that wasn't why he died it was murder by his pretty golden hair

But the fairy lights are dark
On the Christmas tree as restlessly
I stand here forgotten and alone
I've been too long on the floor,
I can't stay here any more
So Jenny won't you please take me home

Oh the statues that I see
Are made out of blackest ivory
But I pass them by never guessing of their meaning
And a million voices cry
As I walk across the sky
Though it's restless here, why it's only in-betweening

For the journey that I'm on
Is incomplete so to my feet
I must rise now and travel on alone
Ah, but if you've got some time to spend
In between now and the end
Oh Jenny won't you please take me home

Now almost every word that I've said that you have heard
Hides another thought left unspoken
And if I may not reach it through the gutter of my speech
Then it best be left unsaid than lie unbroken
And if you wish to see, then from time to time
Look in my eyes
Oh the gold is not far beneath the stone
If that will not say, it doesn't matter anyway
Jenny won't you please take me home

Blow thou winds my good fortunes bring
Mind the hours such as minstrels sing
Come fair thoughts let heart take wing
My lady calls to me.

A Long Way Down From Stephanie

Maid, truly I see
Now it must be a long way down
And with love's burnt shore
Must all dalliance hither
Crumble and wither

Oh strange,
Methought it strange
Thou couldst deprive me of my crown
Thou cast upon me as linden bears fruit of bitter strain

And hold, ere thou dost go
Were not thy moments gilded too?
And in honesty didst thou not measure for measure
Countenance pleasure?

And I would rather, zounds
It were hell's own hounds
Whose foul breath upon my face
Did portent my doom
Than to bear the gloom
Of a world stripped of thy grace

Is your mind a menagerie
Perhaps, I mean it's hard to say
A pterodactyl built its nest on me
I'm feeling strange but quite OK
On this beleeka doodle day

So to Avril and I would like to give
My thanks for lending me your room
I stayed one night, ah but I had to go
I think I'll maybe come back soon