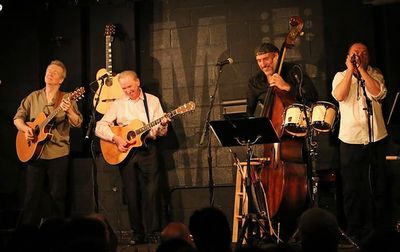 - House of Clocks
- Flying Sorcery
(joined by Peter White)
- Katherine of Oregon
(both joined by Marc Macisso on harmonica, riff of "Runaway")
- On the Border
- Antarctica
(joined by Roberto Valli on string bass, Marc to flute)
- Lord Grenville
- Time Passages
(Marc to sax)
- Midas Touch
- Night Train to Munich
(Al said that he always wanted to perform with the string bass and it really took the song to a new level)
- Gina in the King's Road
(short riff on Stairway to Heaven)
- Soho, Needless to Say
- Year of the Cat (Marc to sax)

encore:
- End of the Day

I concur with Jim B. that this was indeed a great show!
(Like Jim, I attended the Topanga concert, but I know I saw Peter with Al on 2 other occasions: Agoura Hills or Thousand Oaks - the only occasion with Laurence Juber and a fairly large band, and way back at one of the 2 recorded shows at the Roxy. All of those were fabulous. I have a very hard time ranking shows as I always enjoy Al's concerts tremendously.)

Afterwards Al explained that this was because he was not going to get many more chances to "play" the guitar tonight, and proceeded to play & sing a little of *Runaway*. He said that particular song influences everything I do and it's why my songs are all written in A minor.

Then he announced that tonight was a special night ('You picked the right night") and had line-up that had never played together before (50 years).
So he said the person who would join him next, last played at McCabe's 23 years ago.
And Peter White came downstairs (that's the entry to the stage; the Green Room is above and to the side of the stage) and they played *Flying Sourcery*.

Don't recall why this came up: Peter commented on a mondegreen he's heard in an Al song "do you have a song for me or Fred Astaire."
Al added he hears one in a non-Al song that goes "It's time to call Paul Anka up."

Next a simple song about getting old that Al really likes: *Katherine of Oregon* joined by Marc Macisso
http://marcmacisso.com/
previous concert appearance - www.youtube.com/watch?v=5NIOvLzViZY
on harmonica (and a little shaker action for rhythm).

*Runaway* returned briefly and Peter said he had never had a chance to play it on stage and played it until he did part of the solo.
Al's retort: "You just want to (get to) play the solo." And Peter smiled.

"We'll let Peter introduce the next song." So Peter started playing Spanish guitar-style for a few minutes (joined by Marc on shaker occasionally) which eventually evolved into a rousing version of *On the Border* (with Marc adding bongos). Followed by the story of how then piano player, Peter White, came to play a (borrowed) Spanish guitar on the album (Producer Alan Parsons thought the extra guitar-work would be a nice addition).
Al: "And he built an entire career out of that" (Peter said this is true.).

Al introduced Roberto Vally by saying he'd never done a concert with a stand-up bass (gorgeous instrument!) and he'd always wanted to do that.
http://robertovally.com/
http://www.youtube.com/watch?v=QI2oFWiaeDc

So he said this is a song about a cold place, and they launched *Antarctica*.
While I'm personally fond of the sound of a Rickenbacker bass on this song (as that's on the album), this was lovely. Note: Mr. Vally used both finger techniques and bow to play the bass in this concert.

After it was over, Al said that's one of my historical songs and there are a great many; why am I the only one doing these?
He harrumphed that there must be some history teachers, musically inclined, out there who could take up this "task."

Peter said Al amazes him by writing beautiful sea shanties and he's never been on a boat.
Al replied, yes I have and I got seasick.
Then they played *Lord Grenville *(with Marc continuing with flute). Peter reminisced about recording this song at Abbey Road studios with Alan Parsons. Specifically he recalled being very young, amazement at being in those studios, playing the same chords over and over to build up many layers (something AP liked) and a shaft of light from a skylight lighting the scene. He commented that he's not sure any more there really is a skylight.
Al made strumming motions and said he was just worried about getting the
chords right (so they could get out of there faster).

Al explained the next song was one Peter had written and brought to him and after Al rearranged it, they recorded it; "so this is Peter White's song." Peter explained at the time he felt he had written "bits" but didn't know how to write a song yet.
They played *Time Passages*.

The next song Al said was going to be a slow song. "I'm surrounded by jazz musicians and we'll play this (jazz) chord I didn't even know was in the song." Peter identified it as an E minor 9th.
Al said there are 2 modern musicians who are famous for coming from his hometown: him and Robert Fripp (probably most famous for King Crimson). Fripp at 15 was already well-known as playing guitar better than anyone else around.
When Al asked one one day what he was playing, Fripp said he playing jazz chords. Since Al didn't know these he took 10 lessons from Fripp, and then decided "I can't do this."
Years later, Fripp was interviewed and asked "did any of your pupils "make" it?" He said yes, one, Al Stewart. And he did it by ignoring everything I ever taught him.
Played *Midas Shadow* (Marc on maracas & alto sax).

Al - "Another jazzy song and I've been waiting my entire life to do it with an upright bass."
Roberto V. - "The pressure's on!"
Peter W. - "What do you mean the pressure's on? I've got to play like Django, so the pressure's on me!
Let's play "Runaway" (instead)!"
A little playing around, then: *Night Train to Munich*.
Everyone got to do some standout instrumental riffing work on this (Marc on the harmonica with extra accompaniment with shakers & tambourine) except Al, who just grooved along, smiling.

Al "It's a crazy privilege to play with these musicians. And you are here on the right night! And that brings me to Brian Jones."
So Al talked about (playing in a band) opening for the Rolling Stones and meeting Brian Jones when he was 19(?).
Brian was the only one willing to talk with him (~1/2 hour) and let him handle his lime green guitar ("Mick just curled his lip"). He commented that Brian was very attractive to the ladies, so this is a song about one of Brian's lady-friends.
Plays *Gina in the King's Road *(Marc on tambourine), ending with "she loves you yeah, yeah, yeah, yeah."

Al announced that the next one is a memory task and maybe he'll need a teleprompter (some day).
Someone in the audience yells out "Carol" and Al says "I don't need one for that."
Someone else yells out "Swiss Cottage Manoevers" and Al says "you do go a long way back."
As reported, Al starts to play *Stairway to Heaven* and then stops to say this was the first rap song. He steps up close to the mike and vocally just gives the percussion track for *Soho* *Needless to Say* (for at least a minute) demonstrating how it is similar to rap percussion.
Then they play it with Marc adding shaker emphasis.

Al says his voice isn't in the best of shape as he's starting his busy season (36 shows to go) & he's missing a few notes.
When he asks the audience if they can hear that tonight, they say "no" and he says, "hmmm, I shouldn't have told you that then."
He adds that voices get stronger with use, so he expects his voice will get better later in the season.

He mentions the next song was released in Brazil as "El Ano (~ over the n) del Gato" by artist Luke Reilly (the name of his manager) and was a big hit there, El Salvador, and some other Central/South American countries although he never got a "brass cent" from it (bootlegging largely distributing in those places).
So they played *Year of the Cat* (Marc comes down into the audience for the last tenor sax solo).
Al said good-bye for the night & they retreat upstairs.

After much applause commotion by the audience, Al and Peter returned for an encore.
Al explained he's always like Jimi Hendrix's song "The Wind Cries Mary" and at some point he asked Peter to write an instrumental song just like that.
Peter made a wry comment about "just like that" but went off and wrote the next song.
Al said, of course once he heard it, he thought it should have words, but in the middle to keep it a quiet song. So he wrote some.
Peter started playing *The Wind Cries Mary* and segued into *End of the Day*.
Al sang the words, but during the song at the end of 2 of the lines, Peter added the line-ending guitar phrasing of *Mary*.
At the very end, Al added the little harmonic guitar touches (only time he touched the guitar for this song) and then there was a little more of *Mary*.

There were a few glitches: sound monitor levels were not always where the musicians wanted them to be, and Al dropped a pick part way through Lord Grenville at an instrumental portion (the band kept playing). But McCabes' is a great intimate concert location and the entire band seemed to be stoked (playful, smiling, lots of energy and repartee).
Al had this very wide grin on much of the night. After the show I spoke briefly to the musicians and they universally said they had a great, fun evening.
(Overheard: when Al was asked why they didn't take requests, he said Roberto V. only knows a little of the repertoire so they had to stick to the songs he knew.)

Tonight, one of them can't be at McCabes, so it will be a trio. But it should still be fun and great music. (Jim B. will be going tonight. I, alas, have a midterm to write, so I
won't.)

PS: For Jim: for a while Al's concert shirt seemed to be a blue solid, but I've seen this lined number for a few years now.